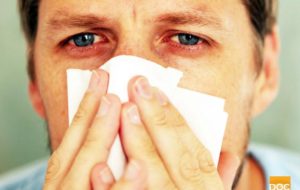 In the 1979 film comedy ‘Being There,’ the lead character—played by Peter Sellers of Inspector Clouseau fame—is a Washington D.C. gardener who is mistakenly believed to be a wise domestic policy expert.  When he says “There will be growth in the spring,” people around him interpret it to refer to the economy instead of to what he meant—which was about flowers and other plants.

The months of April, May and June are certainly a time of the year for growth in the form of more allergy symptoms, and is arguably the busiest time of the year in allergists’ offices.  In my experience, April and May tend to have the most reports about irritated eyes.  I have not seen data published about US sales of products for allergic eye symptoms, but a study published about eye drop sales in another country showed these sales to be highest in the spring.  Internet searches about allergic eye symptoms are also highest in the spring season.

Allergists tend to agree that pollen is higher for longer in recent decades.  This year, people started to mention that their eyes were irritated—itchy/burning/watery/red—during early March.  Those with spring eye allergy symptoms should plan in future years to have available and to start the medicines earlier in the spring than they did years ago.

I think that allergists and other health care professionals who treat allergic eye symptoms would also agree that there is more difficulty in controlling these symptoms—-not because of natural factors such as carbon dioxide but because of the economic factor of formulary restrictions.  What those who control the flow of the US dollar through the health care system don’t realize is that people respond better to one medicine than to another one within the same category.   Pharmacogenomics—the way our genes encode for responding to a medicine—is a major factor.  To use an example of some of the over-the-counter antihistamine names we’ve heard, some people respond better to Zyrtec than to Claritin.  And, some people respond better to Claritin than to Zyrtec.  The same occurs with prescription eye drops, of which there are many.  When a medicine that is not on an approved list requires either hundreds of dollars from a patient or time spent by health care staff to make phone calls and to collate health care records for possibly getting coverage,  treatment delayed is treatment denied (a paraphrase of a  famous quote about justice that is attributed to, but not verified as composed by, the 19th Century British statesman William Gladstone).

What is there to do if effective eye drops are not practically available?  Unfortunately, going back to 1979–when there were no formulary restrictions—can only be done with wistful memories.  For now, these seem to be the options:
1.  Increasing the dose of oral antihistamines.  Medical literature supports this approach.  However, doing this must be under supervision by a health care provider because significant side effects can happen.
2. Using a nasal corticosteroid spray (“steroid spray “) to possibly control eye symptoms through nerve fiber reflexes within the facial area.
3.  Considering a one year trial of immunotherapy (“allergy shots”).  The academic approach by allergists in the past has been to point out to patients that year-round effective allergy shots to treat symptoms that only occur for up to 2-3 months a year is not cost-effective or time-effective. However, some patients may need to consider this type of treatment to try to avoid incapacitating symptoms because there is just no other alternative.

We all are affected  by the winds from the government, the insurance companies, the prescription benefit managers and the pharmaceutical companies.   Each one has its own rational reason(s)for doing what they do.  While we wait for different and better weather patterns from them, we must continue to use what the laws of science and logic give us.