School food allergy action plans are now the norm because of the increasing prevalence of various food allergies over the past 25 years.  For parents and for medical professionals, they seem to be just more documents amongst an endless list of bureaucratic forms to complete.  However, just as we discussed last month with asthma action plans, food allergy action plans do make us more confident—-by enhancing the knowledge of how to recognize anaphylactic reactions and by decreasing the uncertainty and stress from the decision about when to use the epinephrine injectors.

Here in Illinois, a report about food allergy emergency preparedness in Illinois schools was published in 2015 that showed the need for some schools to improve.  The survey was conducted during late 2012-early 2013.  Findings included: (a) a higher likelihood of severe allergic reactions among high school students; (b) a rare occurrence of anaphylaxis drills in order to practice for management of an actual severe allergic reaction; and (c) a lesser likelihood of rural schools to have a written protocol for staff to follow in the event of a severe allergic reaction. Another study conducted during 2010-2011 about a Houston school district showed that only 43% of schools reported having epinephrine injectors while 97% of the schools in the district had at least one child with a food allergy.

The Illinois State Board of Education, the Illinois General Assembly and the Federal Government have recognized the potential severity of food allergic reactions.  There is now a document entitled “Guidelines for Managing Life-threatening Food Allergies in Illinois Schools.”  The State of Illinois has enacted a law that permits a school to store and administer undesignated epinephrine for any child with a severe allergic reaction.  The Federal Government’s ‘School Access to Emergency Epinephrine Act’ gives additional preference to states that require schools to have undesignated epinephrine for anaphylactic reactions, and to have at least one trained staff member on site at all times of the school day for such use of epinephrine. 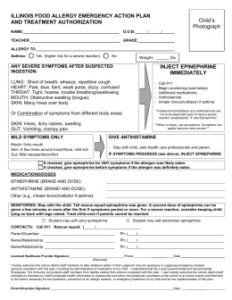 has value beyond the recording of the name(s) of the food allergen and the dose of medication to give.  From the form, awareness about whether the child has asthma—which is associated with a higher risk of a severe reaction—leads to having a lower threshold to use epinephrine for treatment.   Early use of epinephrine has been shown to be associated with better outcomes. The form describes the various parts of the body that can be affected by food allergic reactions.  By labelling which allergic symptoms are mild, school personnel are guided about when only an oral antihistamine is appropriate to use.  And, the form teaches medical professionals, school personnel and parents that some children’s allergic histories can warrant immediate use of epinephrine for either a likely and/or a definite exposure to a food that is allergic for them.

Although modestly time-consuming and seemingly daunting, the school food allergy action plan is much ado about something.  When we frame the oft-quoted Benjamin Franklin advice about preparation in the positive, as in the title above, we change the way we think and we then feel comfortable about what we need to do.