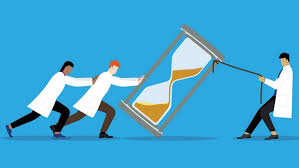 Our immune systems are–like every organ system in our body–subject to the aging process. The term used in the medical literature to describe these age-related changes is immunosenescence. Perhaps no time is more important in understanding this than the past 14 months when the responses to (a) being infected with the COVID-19 virus and (b) being inoculated with the COVID-19 vaccine are both affected by how well our immune system functions.

I have wanted to blog about this topic for some time, even before the pandemic. I hope the following helps to clarify what is mentioned in the media and what we can do to try to slow down the inevitable decline in immune function.  The first two sections are basic science-oriented; the next two sections have more clinical information that is relevant to the disease that has been on our minds to some degree every single day since March 2020.  If you want to skip all of the scientific explanations in the first four sections, and just go to the fifth section on what might help our immune system function better and for longer, that’s perfectly ok.

I.  First, some fundamental classroom type of information about the immune system:

a. The innate immune system.  This is the part of the immune system that has receptors on certain cells—macrophages, monocytes, neutrophils and NK cells—that recognize molecular patterns of certain infectious microorganisms and can inactivate them.  It is the first level of response to an infection and occurs without prior exposure to the microorganism.

2.  Within the adaptive immune system, there are two further categories:

a. The humoral system.  Antibodies and B cells fall into this category.  Some of the B cells live on afterward, “remember” the microorganism and are activated quickly if the same type of microorganism re-enters the body.  These type of B cells are called ‘memory B cells’ that are primed to make more antibodies upon re-exposure to the microorganism.

b. The cellular system.   The T cells are in this category. Some T cells participate in antibody production. Some other T cells also detect cells infected with microorganisms and directly destroy them.  Some of these T cells also “remember” and are called ‘memory T cells’ that can also respond quickly upon re-infection.

II. So, what happens to each of these categories as we get older?

More changes with age are identified in the adaptive immune system.  The following occur with the B cells:

The thymus gland—from which the T cells come—shrinks with age to the point that the tissue only occupies 10% of the original space by age 70.  The following changes then occur with the T cells:

III.  If there are no ‘comorbidities (e.g. obesity, hypertension, diabetes), then how well should an older immune system respond to being infected with the COVID-19 virus and its variants?

In older individuals’ innate immune systems, the macrophages seem to produce an excessive amount of a pro-inflammatory molecule (interleukin-6) which affects production of an anti-inflammatory molecule (gamma interferon) that is needed to combat viral infections.  There is a higher percentage of neutrophils compared to the lymphocytes that would have helped form the antibody response.  Another issue in the elderly is that the lining of the airways is more susceptible to damage from a microorganism because prior infections caused the lining to form scar-like tissue that is not as strong as the undamaged or less damaged tissue of a younger person.

Based on research that dates back to the late 1970s, antibody levels to other human coronaviruses (OC43, NL63, HKU1 and 229E) increase rapidly during childhood and early adulthood but then decrease after age 60.  These antibodies to other human coronaviruses are believed to possibly cross-protect the pediatric population from the COVID-19 virus.  The higher levels in children may neutralize the COVID-19 virus completely, whereas low concentrations in older individuals might cause a phenomenon called ‘antibody-dependent enhancement’ that worsens the infection.

In a younger person, one would expect antibodies against the COVID-19 virus to peak at 4 months after the disease and to be detectable up to 2 years afterward based on studies of patients who had the SARS virus in 2003.  In a March 2020 case report in the journal Nature Medicine about a young person who recovered well from COVID-19, various T cells and B cells were elevated on day 7-9 compared to healthy controls. However, in an analysis of 499 patients with COVID-19 published last May in Frontiers in Immunology, the lowest T cell numbers were seen in those older than age 60.

IV. Does the age of our immune system affect our response to the COVID-19 vaccine?

We commonly measure protection after vaccination on the basis of the level of specific antibodies produced.  However, there is no strict correlation between the level of antibody and protection.  Additional information is needed about the level of memory T cells and on the level of T cells present at the tissue level of various organs.

Based on research of the response to a first dose of yellow fever virus vaccine, older individuals make a slower response during the first week.  The levels of antibody do become similar between older and younger individuals at one month.  However, the neutralizing ability of these antibodies is lower in those older than age 50.  The functions of certain T cell groups and the lifespan of other T cells were also found to be lower in this age group.

Reductions of neutralizing antibody ability, of memory T cell function and of helper T cell function in older adults have also been found in older adults who received the influenza vaccine and the earlier form of the shingles vaccine called Zostavax.  However, the newer shingles vaccine Shingrix has been shown in two 2018 papers to produce longer-lasting memory T cells and helper T cells (Journal of Clinical Immunology) and immune memory lasting at least 9 years (Human Vaccine Immuotherapy). The Shingrix clinical data means that if a vaccine can be designed with  just the right dose and right inactive ingredient called an adjuvant, revaccination after the first year may not be needed for many years afterward.  We hope this can happen with the COVID-19 vaccines

V. Is there anything we can do to delay the changes in our immune systems?

Last year, a review appeared in the Journal of Allergy and Clinical Immunology entitled ‘Fasting, Dietary Restriction & Immunosenescence.’  The authors pointed out that either fasting (water only) for 48 hours or fasting mimicking diets (low protein, low sugar, high fat but low calorie that lasted 2-5 days) that were then alternated with longer periods of a standard diet reversed markers of inflammation in mice.  In a study of individuals with multiple sclerosis, a week-long fasting mimicking diet for one week caused a decline in their white blood cell counts and improved quality of life.  The belief is that chronic calorie restriction may reduce the number of immune cells and their function, but that short periods of fasting or calorie restriction can cause removal of damaged cells, reduce inflammation and/or promote stem cell regeneration from the bone marrow.

Intermittent fasting is gaining attention in mainstream medical journals.  A December 2019 review article in the New England Journal of Medicine evaluated the effects of intermittent fasting on aging and diseases.  While most cited studies were based on animal models, some studies in humans were included.  In two studies, the effects of 5:2 intermittent fasting (i.e. fasting 2 days per week) led to less insulin resistance and a greater reduction in waist circumference than just a 25% reduction in calories.  A 2007 cited study showed that alternate-day fasting for 2 months in overweight adults with moderate asthma led to a decrease in asthma symptoms.  As I wrote in September 2018, adjusting our eating habits is not easy.  However, there is increasing evidence that worthwhile benefits can occur from making that difficult change in lifestyle.

What else can be done besides intermittent fasting?

In the comedy ‘As You Like It,’ Shakespeare describes the seven stages of life—from the first two stages of the helpless infant and the whining schoolboy, through the periods of being a lover and then a soldier and then a judge, to the last two stages of a weakened old man and of finally “second childishness and mere oblivion sans (i.e. without) teeth, sans eyes, sans taste, sans everything.”  As I complete another revolution around the sun this month, I want to make educated decisions based on well-collected data and established biological principles about how to delay those last two Shakespearean stages.  We cannot control completely our physiology the way we would want.  We are, though, capable of controlling our lives in the best way we can know.