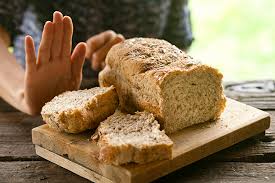 We all have become better-educated by the media and the government about immunology over the past two months.  But, I think we are all also tired of hearing about and living with COVID-19 day in and day out.  I’ve been wanting to write about gluten sensitivity for a while since I heard a 2018 medical study on the topic that was mentioned at an allergists’ meeting about 16 months ago.  I hope this month’s blog helps to understand better what we know about adverse effects of gluten.

The question of being allergic to gluten comes up periodically.  In my experience, this specific question is a 21st century development.  Those of us older than 30 didn’t see food packages or items on a menu being labelled as gluten-free before 2000.  In a literature search of the phrase ‘gluten sensitivity’ on the National Library of Medicine, approximately 1,500 of the 1,877 articles were published since 2000.

These are the conditions that are recognized as being associated with gluten:

—The prevalence is estimated to range from 0.6% to 13%.  The Gallup polling company reported in 2016 that one in five Americans have eliminated or reduced gluten in their daily diet.

—The mechanism inside the body is not well-defined, although involvement of various arms of the immune system- such as a reduced level of T regulatory cells- is reported.

—A literature search of the term ‘nonceliac gluten sensitivity’ on the National Library of Medicine shows that 254 of the 256 publications were published after 2002.

—There is no blood test or skin test or biopsy that can be done to confirm it.  As a reminder of the terms being used by the media about antibody tests for having had COVID-19, a test must have a low false negative rate (high sensitivity) and a low false positive rate (high specificity).

—In the meantime, proof of non-celiac gluten sensitivity would be either (a) a gluten challenge in a medical setting where both the patient and the physicians don’t know whether gluten or placebo is being ingested, or (b) simply strictly avoiding gluten for a number of weeks and seeing the effect.

Which leads to the 2018 study that I mentioned in the first paragraph.  Over roughly the past seven years, some clinicians and researchers have questioned whether something else is the cause for symptoms after eating foods containing gluten.  The clinical trial published in the journal Gastroenterology evaluated 59 patients who received gluten, fructan and placebo at various times.  Fructan belongs to a group of short-chain sugars called FODMAPs.  A list of foods containing these can be found on this link: https://www.health.harvard.edu/diet-and-weight-loss/a-new-diet-to-manage-irritable-bowel-syndrome

FODMAPs cannot be absorbed from the small intestine and pass into the large intestine, where they cause retention of water and where our microbiome—which include bacteria—ferments them to gas.  Fermentation is good for making alcohol; it’s not so comfortable when there is too much gas occurring inside the intestines.

The result of the study was that the worst symptom scores of irritable bowel syndrome occurred when these patients ate fructan.  The authors concluded from this randomized double-blind placebo-controlled observation that fructan should be considered as a cause of such symptoms, since foods with gluten often contain fructan.

FODMAPs are not the only part of wheat that may be the cause.  Amylase trypsin inhibitors naturally occur in most cereals and have been shown to trigger immune responses.  If one were to go gluten-free, one must compensate for subsequently having low fiber in the diet. Low fiber is associated with various vitamin and mineral deficiencies, as well as an increase in mercury and lead absorption.  If one were to go on a low-FODMAP diet, lesser numbers of beneficial gut bacteria and less calcium absorption can occur; adjustments in probiotic use and calcium supplementation may be needed.

Over the past two months, we’ve heard the phrases “the new normal” and “the other side” in referring to the future after the troubling socioeconomic situation we are now enduring.  If we can make certain long-term changes to avoid infections, such as no longer shaking hands, then we can certainly make changes in what we eat to feel better too.