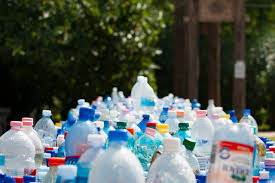 The October 1st issue of the Annals of Internal Medicine included a research article that caught my attention because of the unusual topic:  microplastic substances in human stool.  With the news in recent years about microscopic particles of plastic being found inside plastic water bottles, I was curious about whether the patients who were studied had consequences or associations with certain medical conditions, so I looked at the entire article.

The authors wrote that they chose to study this topic because microplastics have been found previously to contaminate seafood and sea salt as well as bottled water.  Ingestion of microplastics would then seem to be certain to occur, which could even happen from atmospheric fallout onto the food we eat.  All 8 patients studied were considered to be healthy and without any gastrointestinal disease.  Every stool sample from these eight patients contained some microplastics, ranging from 8 to 416 per 10 grams of fecal material.  All but one of the patients consumed beverages from plastic bottles.

The authors further speculate that a specific microplastic size may be retained and cause local immune responses in the intestinal wall.  They cite several publications from the past three years that show absorption of microplastics and some indication of harmful effects in animals.  While there is insufficient evidence of microplastics primarily causing inflammation in humans, they write that patients with prior intestinal disease—such as ulcerative colitis or Crohn’s disease—may be more susceptible to cell damage from them.

At least as early as 2004, an association between asthma, nasal/sinus allergies and eczema with certain chemicals added to plastics has been believed to exist.  A study that year from Sweden compared 200 children with allergic conditions to those without allergic conditions.  The researchers showed that the dust samples from the bedrooms of children with allergic symptoms had high levels of certain phthalates—chemicals that are added to plastics to increase their flexibility and transparency.

Two recent publications also address a connection between microplastics and allergic conditions.  One was published last month that examined the responses of human cells to secondary polypropylene microplastics.  The scientists found that these microplastic particles stimulated blood cells to release more histamine.  The other article was published last year in the Journal of Allergy and Clinical Immunology.  The researchers found an association between pregnant women’s urine concentration of a phthalate metabolite and an increased risk of asthma in their children.  The findings were replicated in mice.  The authors also showed that a specific immune cell from those mice exposed to the phthalate metabolite had widespread DNA alteration.

So, what should we do with this information for the time being until there is more scientific evidence to answer whether an association exists between plastics and various adverse effects on our health?  Should the concern extend to the use of these chemicals in our medications because capsules and extended release tablets contain phthalates?  It may not be unreasonable to take a hint from what we are advised to do about conservation measures for our external environment and apply them to our internal environment.  If we practice healthy habits that include what we eat and if we decide whether we really need to use a certain product, then we expose ourselves to less risk.

I chose the title for this month’s blog because of its reference to the 1960s film that arguably best represents American culture of that decade—‘The Graduate’ (Academy Award nominee for Best Motion Picture and Academy Award winner for Best Director).  In the beginning of the film, the suburban Southern California parents of the main character Benjamin throw a party at their home to celebrate Benjamin’s graduation with honors from an unnamed East Coast college.  We are not told during the film what Benjamin’s major is and he doesn’t know what to do after college.  A self-assured friend of his parents gives the following career advice to Benjamin: “I just want to say one word to you, just one word, are you listening?….Plastics…..There’s a great future in plastics. Will you think about it?”

Well, it turns out there is more to think about.  The optimism in the 1950s and 1960s about the unlimited benefits of plastics seems to have blinded us to the possibility of their unintended consequences. We need to have an open mind about the effects of synthetic substances on our health.  Otherwise, our futures may not be the great ones that we would like to have.