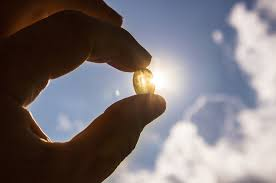 Last month, one of my patients who has an immunodeficiency said she takes melatonin and asked me if there is a beneficial effect of melatonin on the immune system.  The subject came up a few weeks later—around October 1st–in the media when melatonin was mentioned as part of a certain individual’s initial treatment for COVID-19.  Since the topic of light is on our minds this weekend as we ‘fall back’ with the time change to standard time, some attention to how melatonin affects our immune system is worthwhile to better understand.

Melatonin is not a substance that was first created in a test tube.  It is mainly produced during the dark phase of the light/dark cycle in an area of the brain called the pineal gland.  The peak level in the blood usually occurs 4-5 hours after darkness begins.

Melatonin is also produced in other areas of the body—the retina, the gastrointestinal tract….and lymphocytes that make antibodies. Since 1993, melatonin has also been used as antioxidant therapy based on its chemical structure.  Basic science studies, mostly with non-human tissue but also some studies that used human tissue, show that melatonin can prevent release of inflammatory molecules and enhance certain T cells—the cell type we have heard in the media that also contributes to immunity against viruses.

The basis for using a melatonin supplement for treatment of COVID-19 stems from the low blood levels of melatonin in elderly individuals and in those with chronic metabolic diseases such as diabetes.  A June 2020 review published in the European Journal of Pharmacology proposes that melatonin has antiviral activity based on basic science studies.   Among these is a 2015 study showing melatonin to increase an enzyme (called heme oxygenase-1) that prevents replication of the Ebola virus.

A 2018 review article in the Journal of Allergy and Clinical Immunology entitled ‘Clockwork allergy:  How the circadian clock underpins allergic reactions’ describes well-documented changes even in allergic diseases during day and night.  The light stimulus is considered a strong external cue that adjusts the activity of the circadian clock, which is the periodic biological rhythm observed in virtually all living organisms.  Most patients with allergic rhinitis worsen overnight or early in the morning.  Nocturnal itching is a typical feature of eczema.

The first time I worked in a basic science research laboratory was forty years ago–during the summer of 1980 between my junior and senior year of college—for a biology professor.  Ironically, the subject she studied was the light/dark cycle, specifically its effect on reproductive hormone production in hamsters.  Scientists will often say that a condition is due to multiple factors.  We often don’t know which factor is the most important. But in a year when we are all affected by our understanding of science, we need to be open-minded and consider possibilities that are staring us in the face. The mere exposure to light seems to be one of them.