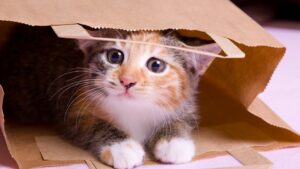 In June, I discussed the topic of whether there are hypoallergenic dogs.  The question should probably be whether the person is hypoallergic. Scientific studies do not support the existence of a hypoallergenic breed of dog.  However, wide variation between individual dogs within a breed exists.  The variation may allow a dog-allergic human, who can tolerate a higher level of exposure to dog allergen, to be able to be around certain individual dogs—in particular, smaller dogs.

I planned for this month’s blog to be brief—amidst a busy August for allergists during ragweed pollen season—for tying up a loose end about whether hypoallergenic also applies for cats.  Cat allergy can be quite profound for those at risk.  Having a cat, compared to having a dog, has been shown in a 2011 study to increase the risk of eczema in children 4 years-old.  The major cat allergen, called Fel d 1, is quite potent and is in the cat’s skin, saliva and urine.  After a cat licks itself, the saliva evaporates and the aerodynamically lightweight Fel d 1 protein becomes part of the air.  Studies in the 1990s showed that cat allergen can even be detected in the air and on upholstered furniture of hospitals and day-care centers— being attributed to cat protein being present on people’s clothing.

Websites similar to the American Kennel Club will state that the Sphynx (such as ‘Mr. Biggelsworth’ from the Austin Powers films), and other breeds–such as the Cornish Rex and the Siberian–are hypoallergenic because they are short-haired or have relatively low levels of protein in their saliva. The quite strong scientific consensus is that hypoallergenic cats are also a myth, albeit extrapolated from the studies about dog— as I could find no study similar to the 2012 publication about analyzing different dog breeds.

I expected at the beginning of this month to end the blog here with a couple of additional sentences.  However, a study about a new approach to treat cat allergy was published last month in the Journal of Allergy & Clinical Immunology and was publicized this month in online sites such as Forbes magazine.  Scientists from Switzerland, Latvia and England collaborated to test the concept of stimulating cats’ immune systems with a vaccine in order to make antibodies that can (a) bind the Fel d 1 protein and (b) prevent the Fel d 1 protein excreted by the cats from being potent enough to cause symptoms.  They created a vaccine that is a combination of synthetic Fel d 1 protein and a virus-like particle that contains a section identical to that recognized by the immune system during vaccination of humans for tetanus.

All 51 female cats and 3 male cats used in the study made elevated levels of such antibody to the vaccine.  The antibody was shown to decrease local allergic reactions to cat protein when the antibody was injected into mice exposed to cat protein.  The level of Fel d 1 protein in cat tears was studied in 18 of these cats and the levels decreased by a factor of over two and half-fold.    The researchers hope that cats can be routinely vaccinated sometime in the near future with this synthetic mix of cat protein and the virus-like particle.

The concept and the results of the study seem to be quite promising.  However, I am reminded of another time in the mid-1990s when a biotech company named Immulogic tried to develop a recombinant (i.e. synthetic) cat protein that would replace the cat extract used for allergy shot desensitization.  During my allergy/immunology fellowship, one of my mentors (who had no conflict of interest with this company) was very enthusiastic about the scientific approach this company was using. Being a student who respected his opinion and his own considerable number of publications in both basic science research and clinical science research, I bought 100 shares of this company–selling around $5 a share– for my oldest daughter when she was born.  This became the first and last time I would invest in a company that manufactures products used in allergy/immunology.  The recombinant cat protein research proved to be unsuccessful and the stock became my oldest daughter’s first capital loss investment.   To quote a line said by the character Gordon Gekko—played by Michael Douglas–in the sequel to the film ‘Wall Street:’  “Idealism, idealism—it kills every deal.”

Will the recent research on a cat vaccine succumb to the same fate as the cat allergy research of the 1990s?  Perhaps approaching the condition by ‘considering the source,’ rather than by trying to alter the immune system of the person affected, makes more sense in pet allergy.  Time will tell if this cat vaccine has nine lives—and more.