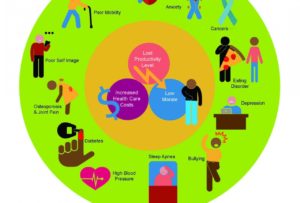 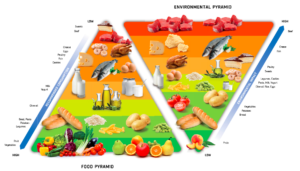 September brings the start of another academic year.  After a relaxing summer in the sun, adults often feel a vicarious urge in the autumn to learn new things or to change habits.  Whether it is now or with the New Year’s resolutions of December-January, the topic that is among the top tier of things to want to change is to lose weight.

However, body weight also is in the top tier of topics to avoid for those who want to help. No one wants to be corrected. And, no one wants to be prejudged about what one can do and about how affectionate and supportive one can be because of his or her appearance.  Health care professionals, and those who care about and feel responsible for someone, get no pleasure from identifying such a concern.  All of us must have the courage to both tell and to accept when something needs to change.

With body weight, it is common knowledge that being overweight (BMI 25.0-29.9) or obese (BMI greater than 29.9) worsens high blood pressure and leads to type 2 diabetes.  Lesser known is that the World Health Organization (WHO) has concluded from studies that higher amounts of body fat are associated with at least a 20% increased risk for 13 different cancers.  For women, the risk is 2 to 4 times greater for uterine cancer.  The risk of having colorectal cancer or liver cancer is increased with being overweight or obese, and the risk is even worse among men.

Multiple studies show, and experts in the area conclude strongly, that there is an association between obesity and asthma in both children and adults.  The biological mechanisms for the association between asthma and increased body weight have not been determined, as there is no pattern between body weight and the tests for exhaled nitric oxide and blood eosinophils that allergists and pulmonologists now use to better prescribe treatment. Standard asthma international consensus guidelines do include weight loss in the treatment plan for overweight and obese patients with asthma.  Over the past ten years, adults and children with asthma are classified in the medical literature according to phenotypes, which are the individual’s observable characteristics.  An obese phenotype is considered as a specific type of asthma.  By analyzing different phenotypes, researchers hope to tailor treatment that will be more likely to be effective.

The evidence for body weight affecting nasal/sinus/eye allergies is more uncertain. Conflicting results exist depending on the country where the research was conducted.  A study published in May 2016 based on 8,000 participants in the United States showed that overweight or obesity was associated with greater odds of nonallergic rhinitis in adults, particularly in men.  There was no association between being overweight or obese and having nasal/sinus symptoms due to airborne allergens in adults.   U.S. children who were overweight or obese did not have a higher likelihood of having nasal/sinus symptoms from airborne allergens.

The connection between body weight and other allergic-type symptoms has been studied to a lesser degree than for asthma and nasal/sinus/eye allergies.  One study from Europe in 2015 found high BMIs were associated with urticaria/eczema in both males and females. Earlier studies from Japan and the United States also found a positive association between obesity and eczema.

The inevitable question comes up about what is the best way to lose weight and to maintain the weight after the weight is lost.  Until the day comes when a specific diet can be predicted to work for a specific person based on comparing that person’s gene pattern to the gene pattern of those who did respond well to a certain diet, these dietary habits from a 2009 BBC documentary [https://topdocumentaryfilms.com/10-things-you-need-to-know-about-losing-weight]seem sensible:

To modify greatly what one does as a routine and still have the natural joy of eating is not easy.  But, if we keep in mind that the goals are to routinely feel much better than we now do and to live as long as we can, the joy of the accomplishment will set us in the right direction.